This update would have been created normally about a week from now. After recovering from 4 days of NakaKon setup and selling.

But in a turn of events that no one thought would happen. The city of KC, issued a state of emergency, and the convention, taking place in Overland Park, was cancelled, 45 minutes before load in for vendors and artists, on Thursday. I go into it, and a lot more in the video above.

It's been a bit surreal. Planet Comicon, which does take place in KCMO, at Bartle Hall, also cancelled it's show, and has opted to move to later in the fall, dates pending. NakaKon, seems to be pursuing the same sort of path. 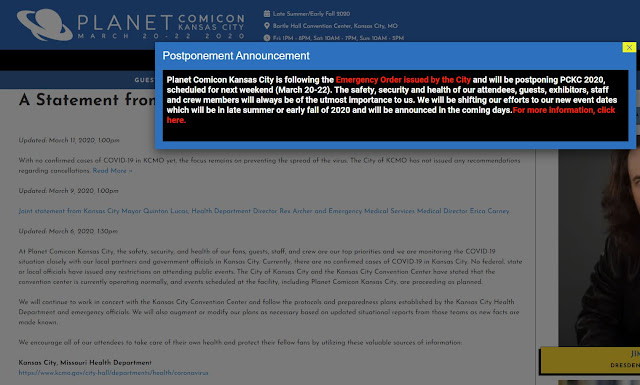 To say that it's been an emotional toll for a LOT of people, is now the understatement of the month. Not just people that traveled to showcase, but attendees, restaurants, and other services that would have benefited from the increased foot traffic are getting a double whammy in the form of no shows, and a state of emergency for the KCMO area.

A LOT of artists/vendors I know, are going to take a hit from this, from these two shows. I'm going to include some of the links below so anyone reading this can go check them out.

These were just some of the creators I know were going to be at Planet Comicon, I will add to this list if anyone wants to send me a link. Leave it in the comments below, or shoot me a message on the social media.

Here's to hoping for a late year revival for both of the shows. If end of summer, early fall fell into place for both of them, then that could still leave a good 6 months before the 2021 show runs begin.

I cover this a bit in the video, but I want to say, if any of you guys, from attendees, to artists/vendors, are feeling down, that's okay to feel that way. Things aren't easy right now. If you all need an ear to sound off to, reach out to me, we can hang out, or just chat online, whatever can help if you need it. I'm fighting off a lot of depression right now, for a lot of reasons. So I get it.

Until next time, remember to support artists and local businesses. Be kind to your fellow beings and always take the path less traveled. We all may live in times uncertain, but kindness, understanding, and believing in the good that is in most each and every one of us is what can bring about better days!