I don't even remember what hour I got up, I think around 5:30 am or so, to get out before the crowds would start to gather. A lot of the businesses don't open until 9am, and most people get started around 9:30. So if there's any advice here to be had, get up. Early. And you'll have a much more full day and more things done before noon than you can shake a stick at.

The first bit of historical coolness that was on the way into the park, was the Roosevelt Arch. The arch was constructed after Theodore Roosevelt laid down the cornerstone, in 1903. There's a quote at the top of it, that is from the Organic Act of 1872, that reads, "For the Benefit and Enjoyment of the People".

If you've never been to Yellowstone, just about every aspect is large and expansive, so this arch was a nice preview metaphor for the day to follow.
The first place I started warming up my camera finger at was Mammoth Springs' Hot Springs area. At first, it looks a bit odd, bleached white, a little unfriendly, and not seemingly too photogenic. Even the warnings which are in a few languages, but rounded out by the international language of surrealist tinged artwork meant to serve as a warning, but is absolutely meme worthy fodder, were weird.
The springs are very alien in appearance to me. Maybe this is from years of science fiction, but each in my head, especially as I filmed them, felt like I was on a locations scouting hike for the next Star Wars movie.
What you're seeing in these photos came into existence over thousands of years. When hot water from the spring outlets would cool and leave deposits of calcium carbonate (it's also called travertine, which is a form of limestone), they form these fibrous looking wild patterns in the rocks. It's an amazing observational study of erosion, additive sediment action, and geothermal process, unlike anything I'd ever seen before.
Terrace Mountain in particular is the largest of these sort of spring carved natural formations, followed by Minerva, which from what I understand, was rendered dry because of some minor earthquake activity.

Evidently, earthquake activity is per the norm, as a LOT of geological activity is consistently hashing out it's earthly issues, far below.
Liberty Cap is an odd relic, with a colorful history. So it stands at around 37 feet tall, marks the norther portion of Mammoth Springs, and got it's name in 1871, by the Hayden Survey group, because it resembled the peaked caps worn during the French Revolution.

The spring that created it was pretty consistent when it was flowing, and what you see is a few hundred years of deposit formation. It's pretty unique in that it just sticks out distinctly. I always try to fathom what was going through the minds of the first European based travelers as they came across not only Liberty Cap, but the springs in general.
After spending a few hours walking and appreciating the springs, I wanted to get out of the sun, and see what sort of little collectibles I could find for myself. Yeah, I'm totally that guy, not the one that always gets the t-shirts anymore, but I have my own physical earmarks of memorabilia I like to look for and discover.
Hobbies of any kind can be a wonderful ice breaker. While at a park gift store, I discovered National Park tokens (which are collected in folios similar to pressed pennies, but with no pressing involved), and as I spoke to the lady at the register, it only took a few "testing the geek waters of conversation" and it led to full on conversations about comic conventions, the 501st stormtroopers group (she was an Imperial Officer cosplayer), and random comments about what fandoms and hobbies we liked. All in like a 4 minute window of conversation, that ended in both of us agreeing we missed attending comic conventions something terrible!
Onwards into mid day, a road side rest stop that brought out the kid in me was this area of large climbing rocks. Now under the best of circumstances, I'm not always a fan of heights, but I was a kid that would climb some trees, and always crawled around and under big rocks. I think it's why I love canyons so much when I can get a chance to go to them.
The weather was very windy, but warm. One thing I didn't realize at that time was that although I knew enough that air gets a bit thinner at higher altitudes, I wasn't keeping as well hydrated as I should have been.
Getting a chance to just be out and look around and feel like I was a little kid again, was priceless. I didn't think about the extra little exertion I was doing in climbing in and around, because I got a pretty good dosage of happiness that washed over me like a fond memory.

Yellowstone was beginning to let me lose a lot of my own self doubt, worry, and pulled me into focusing the living world around me. How far this was from a corporate cubicle. How rough and varied the textures of the surroundings were around me. For a lot of years, this was something I knew from my years camping, and just being in Boy Scouts.
Running my hand over the rough bark, lines of sticky sap, now across my palm. The cool shaded areas underneath the larger rocks... feeling the wind blow hard around me, made me think of a lot of the parts of myself I'd locked away, if only because I didn't feel a connection to those times as strongly as I once did.
But right there, I did. It was gottdamn wonderful.
I remember thinking, I wonder how many bison I'd see. If you have not been to Yellowstone, and you will be there for more than a day, put that worry to rest. They are there. They are there so often, you'd think they were there to talk to you about a limited time offer to extend your car's warranty.

All kidding aside, if time had been on my side, I would have sat and watched, sketched and just chilled out at a "park recommended safety distance, because in NO reality can you hope to outrun a bison", and been freaking happy.

What's not to love about these guys?! They are big and hairy, have legit beards, horns, and they grunt a lot.

The day would now lead into going to see more springs and mini fountains. One thing that is a reason to get up early, is that parking can be highly challenging to get into, especially during the peak hours of human interaction and mobility, which in this park is from the hours of 9am till 4pm. The park does not close, so it always got to me that people were not more spread out in how they went to see things.
Onto the Norris Geyser Basin area. It's a massive area of walkways that encompasses the Back and Porcelain Basins. From a geothermal aspect, the area has been active for well over 100,000 years.

Two things I should note, there are walkways. Do NOT leave them, and don't bring your pets. Seriously.
Oh an one more additional thing, if you have a hat. Tie it down, or put in in your pocket. Seeing a hat half submerged in a spring is both depressing, and just annoying. The rangers and caretakers of this park have enough to worry about in a pretty unique and fragile ecosystem.
So this cool informational area is the entrance to the Norris Geyser Basin walkway. It's the last bit of shade you will feel for a while if you take the long walk across the boardwalks. 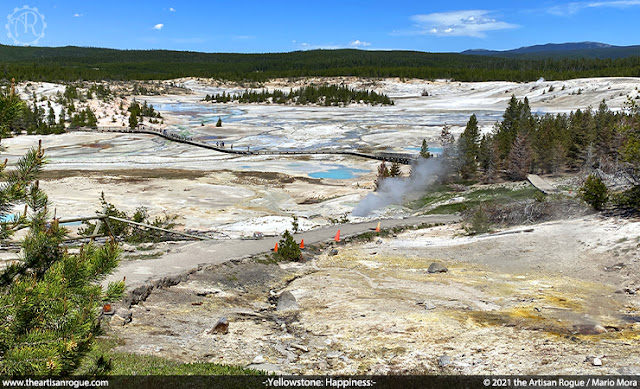 Something that I can't state enough is how varied the areas of Yellowstone really are. You can go from lush grassy areas, to burned out forests, to wide plains, to partially barren hot springs and everything in between.

It's a good idea to bring some bottled water with you. I, did not. The boardwalk views are great, and it is something to see, just how many and how big the area is. Compared to other places in Yellowstone, it's not the most traditionally scenic area to be in, but bear in mind, you won't see places like this anywhere else in the United States.
Evidently because areas like this were so isolated when westward expansion was happening, many early settlers regarded most of Yellowstone to be mythic or rumor at best. Areas like this were described as being not unlike a version of hell, with brimstone and steam inspiration coloring the tales.
As the day went on, I started to wear out. It was a combination of the hiking, the lack of prep on my part to stay effectively hydrated. Another bit of advice? If you are planning on going somewhere like this, start working on your walking and hiking game.
I had to call it for an early night, I was pretty sure between a headache and some muscle soreness, I had a bit of heat exhaustion. There were still some days to go, so drinking a bunch of gatorade and water and getting to bed right around 7pm was all I could muster. I still had some days to go, so I wanted to get better quick!
Even though I was not feeling that great, I still had happiness in me. Join me next week, when I'll be back with part 3!
Until next time, remember to support artists and local businesses. Be kind to your fellow beings and always take the path less traveled. We all may live in times uncertain, but kindness, understanding, and believing in the good that is in most each and every one of us is what can bring about better days!