So if you remember my last update, I had some in progress shots of the staff as super hero inspired characters. It was a lot of fun, and I was really happy with how it came out. The great backing design and overall layout, art direction and original idea was guided by my colleague Sara (who worked at APA) whom I'd known since my college days. I'm looking forward to this becoming a yearly sort of project with APA,

So that was absolutely an up for me to have at the beginning of December. For me, this has historically been a month that can be rough for me to get through, for myriad of reasons.

But this year I thought I was going to have a rougher time of it early on, as one of my housecats managed to get out. The weather was turning bad. Rain, forecasts of colder weather. The thought of a less cheery holiday time, now missing two of my three cats (since Zero had passed away only some time ago).

But I was able to purchase a good sized Havahart trap that I had to modify slightly, because he was able to figure out how to not set it off and get to the food/bait that was in it. After some misfires, a few long sleepless nights, and lots of time using a PetCam web camera to attempt to catch him, hunger overtook him, and he got himself caught in it.

He was missing his collar with a bell, very hungry, and thirsty, and in the end had caught what seems like a cold. I have as well. I'm on meds, and he's going to the vet tomorrow to get checked out. But Christmas came and went with all the current fuzzies in my life accounted for.

So as I mentioned, I got sick. Not the best thing to have happen when one is being productive, and I am already way the hell off of the path of project completion dates I had worked out. But, I'm getting there.
I'm about 3 pages from completing the artwork for the preview issue of Ardor, so I'm hoping to have that off to the printer very soon. I have very few shows I will be doing for the foreseeable future, but it will be available at them.
So yes, Christmas has come and gone, and for all of you out there that celebrate other holidays, may those have been just as merry and joyous. This year was a tough one overall for my extended family, and for what it's worth, not the most prosperous for me, but I had some really wonderful people in my life pull things into focus for me. I'm very lucky for the love, the care, and the friendships I have.
One thing that almost didn't come together because I was sick was that my parents weren't going to do the whole Chinese food on Christmas day thing. I didn't care how terrible I felt, I had to do it. My parent's didn't start doing that because of any movie plot tradition, or for any other reason than they have never ever done anything traditionally.

Except Chinese food from Warrensburg's King's Chef. Ever since I was at least 16 years old. I was happy to have been able to surprise them with a visit and some take out. Sounds silly, but it's the little things in life. 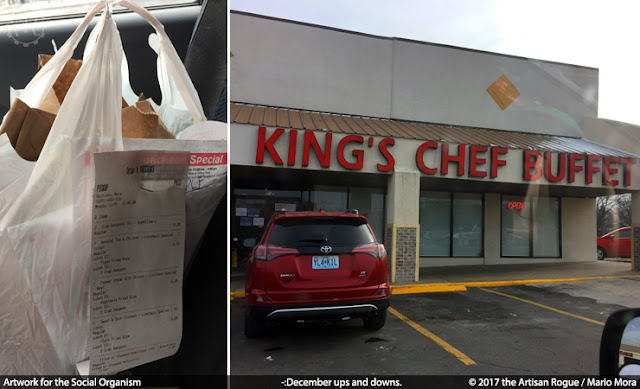 Now, if there was one big let down, and I'll not wax on about it for very long, it was getting to see the latest Star Wars movie.

It was enough that not only did seeing the movie make me feel like I fell so far from the target audience, that I actually found myself floundering in my own fandom. I know of many people that did in fact love the film, if not life it well enough.

I did not. I will say there were moments that were very cool, but they were far and few between. I'm not sure I will really want to see whatever JJ has in store for the next film considering the almost flippant nature that this one was handled with by Rian Johnson. 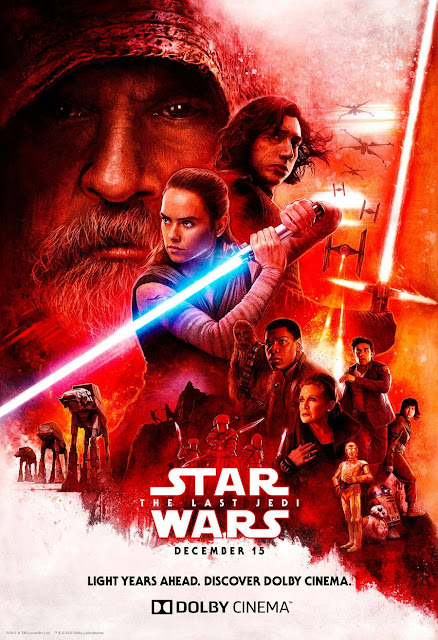 I actually am in the minority on this, but I miss George Lucas. Maybe. As it sits, I just have to admit this is one more fandom I think I have outgrown, or maybe more, have decided to like the stuff prior to Disney owning it.

But that first world problem aside, I am counting myself as a very lucky and blessed person at this year's end. We live in a day and age where sometimes we have to wonder how the days coming will turn out for all of us. Uncertainty is absolutely in the air, but hopefully a growing sense of unity and home grown prosperity.

I've been streamlining this site, and have added my new Ko-Fi account at the link above for you all to check out if you like what I create. It's like Patreon without the monthly donation action.

For all of you reading this, thank you for being on this journey with me as you read this blog. I appreciate it. Sincerely.

Someone much wiser than me once said "if we all loved and lived as fully as our hearts desired, dreams would cease to exist, and today would always be tomorrow." It's taken many years for me to begin to understand it, a moment to remember it, and forever to believe it.

Until next time, have a happy new years eve, and be safe! Support your local artists, be kind to your fellow beings, and always take the path less traveled!