I'd not done TopCon before. I knew it was a smaller show that was growing. That was about all I had to go on. But I always go into every show with the idea that new connections, ideas, and possible sales can come out of them. I mean, sure, anyone that vends at a show wants to make some income, and I'm not adverse to that.

But considering how my run of shows have been varying from decent to way off the freaking mark, I try to find other ways to make shows work for me. Like other artists, I'll bring artwork to work on, accept commissions, write, work on this now almost year long documentary, and catch up with friends. 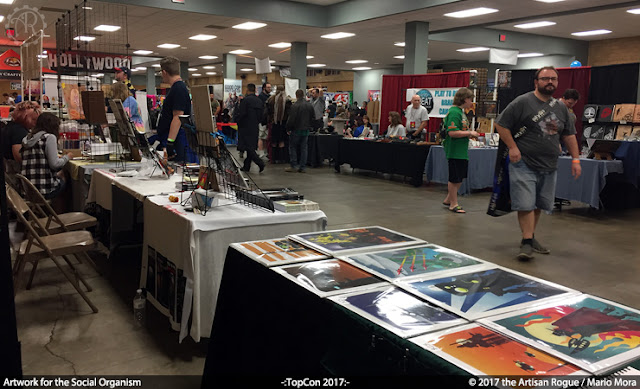 I love great conversations, and just talking about infinite subjects, and I can say that if there is one thing that is so very wonderful about comic/pop culture shows, either big or small, it's that I have some friends I could talk endlessly to about games, history, art, creating things, you name it.

TopCon for me was not a financial success, but in other ways, it was a blessing, and a wonderful vial of regeneration for my soul.
I did get quite a bit more sketching done at this show, my only lament was that I forgot my tripod, so none of these got filmed in any capacity. That's something I hope to add to my set up down the road to facilitate making YouTube content, or possibly live stream to Twitch. So many possibilities, so many variables to overcome.
This show had more than a good number of people attending a comic show for the first time. I keep thinking that most people that attend these shows have been going to them for years, but many of them as I was pitching ICWXP and we got to talking about Kansas City in general, had not heard of Planet or NakaKon, which was kind of surprising.
Something I was finding was how for a good number of them, larger shows were just too much to handle. Either because of the spectacle, the costs involved, noise, general environment, you name it. It gave me some pause in how I may approach some of my marketing and what shows I may do in the future.
I was pleasantly surprised to meet people that had followed my insane ramblings and art video productions on YouTube. There are times when I feel that I am performing to an empty theatre, which just brings back all kinds of horrible stage fright moments, and it's back to being a failing stand up comedian all over again. But when people come forward and give me ideas and feed back, in constructive and truly engaged ways..., oh man, that's just the best.
By the time the show started to draw to a close, I was pretty tired. This year, the amount of shows had really started to wear on me some. Maybe it's because I am recording them more than just as blog posts, I am running the chance of increased burnout.

I had decided (you can tell by the look on my face below) that this would be the last show I was going to do this year.
But it was not to be, as in a bizarre twist of chance, fate, or utter forgetfulness, I somehow am now getting ready to do KCCC this weekend.

So the next update will be my fatigued and disjointed blog update on KCCC, which I am hoping will be a high note to end the year on.

Until next time, support your local artists, be kind to your fellow beings, and always take the path less traveled!